Happy New Year, friends! It’s hard to believe that it’s 2020 already, much less the start of a new decade! Will you walk down memory lane with me for a bit, as I think about this past decade?

By January 2010, I’d been in Austin for just two years but it didn’t feel like home yet.  But that year, I started coming out of a years-long funk that I’d been in, for myriad reasons.  That February, I moved into a smaller apartment, one that felt cozier and less lonely than my first one had.  I was still very single but didn’t realize that I’d already met my future husband six months before.  Several days after moving in, I drove down to San Antonio for a friend’s birthday party, which was when I’d started partying a bit for the first time in my life.  Nothing crazy because I am admittedly pretty boring, but I’d found a group of friends I could trust implicitly and have fun with.

That March, my friends crashed at my place after I experienced my first SXSW.  I started taking drum lessons that same month.  A friend and I collaborated on a music project and made YouTube videos of our cover songs.  I have a hard time watching those videos now because of my corny performances and subpar singing, BUT that project gave me a lot of confidence. I still struggled with loneliness and sadness, but I was the happiest I’d been in a long time.  That was the year Austin finally started feeling like home.

One of my favorite Austin-related discoveries in 2010 was Town Lake.  It’s a beautiful trail nestled right in downtown Austin (it’s technically Lady Bird Lake, but it will always be Town Lake to me).  Running on that trail instantly felt like home, and it became a favorite past time.  That trail is very meaningful to me.  I trained for my half marathons and marathons there.  In early 2012, when Husband and I finally started dating, one of our early dates was walking the trail (today is our eighth anniversary!)  Reader, I got engaged on that trail.

When we were saying goodbye to Austin, I wanted to make a pilgrimage to my favorite spot on the trail, a pedestrian bridge.  Look one way, and you’ll see the lake.  Look the other, and you’ll see the skyline.  I never tired of the scenery, no matter how many times I ran the trail. I would constantly look from one side to another as I ran across the bridge, marveling at the beauty of my city and feeling so lucky that it was my home.

In July, we went back to the trail right before we moved.  My friends had come in for a farewell weekend.  For whatever reason, we didn’t make it to the trail until close to noon, so it was already very, very hot.  We had the dog with us since we were still showing our rental house. We didn’t make it very far and we cut our walk short due to the heat.  So I didn’t get to say goodbye to the bridge, but perhaps it is for the best.  I think seeing the bridge would have made me very sad at that point.

I’ve thought about that spot a lot since we moved, and I knew that when we returned to Austin for a visit, I had to return.  Sunday morning, we drove up and parked close to the bridge.  We’d already said goodbye to our family and friends and were ready to make the long drive back to Indiana, but there was one more thing I had to say goodbye to.

Sometimes there are places or events you revisit in your life that end up being disappointing the second time around.  It’s difficult to recapture the magic of your memories when you try to relive them, and you can regret even trying. I’m really happy to say that this was not one of those times.  The scenery from the bridge was even more beautiful than I’d remembered.

Look one way, and you’ll see the lake.

Look the other, and you’ll see the skyline. 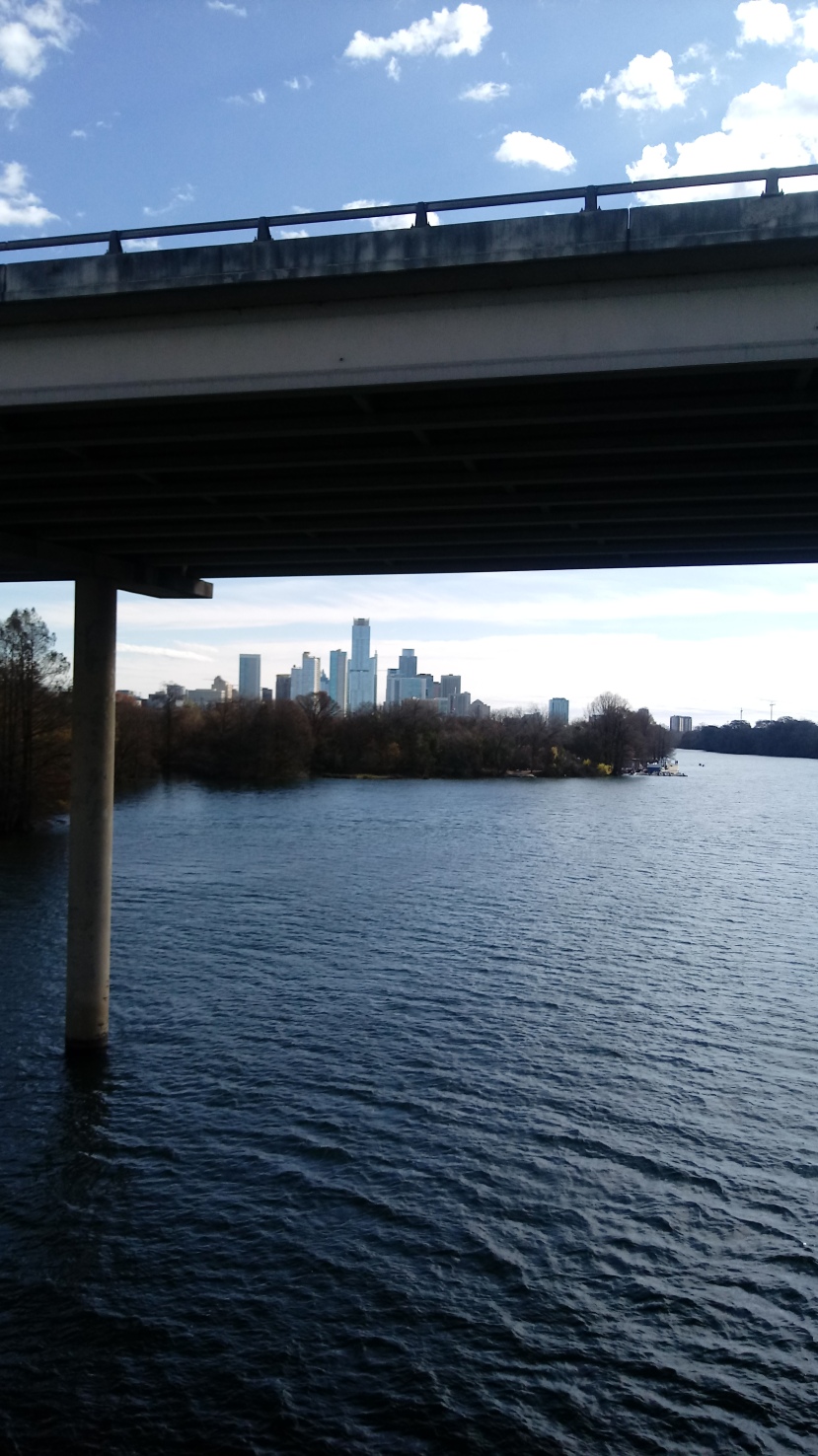 I took a deep breath, feeling the cool wind on my face, drinking in the beauty.  This wasn’t my home anymore, and probably never would be again.  All the grief I’d held on to for the past five months bubbled to the surface.

But as I left, I remembered what made Austin finally start feeling like home. Having friends.  Making music.  Living a life.  And I knew that I would make Indy my home, but that I would have to put more effort into it.

I’m so grateful for the experiences and lessons I’ve learned in this past decade, for living in such an amazing place.  But I’m ready to move on in this next chapter of my life.  I was surprised that when I returned to Indiana, it felt more like home than when we’d left for Texas.  That as much as I’d missed Austin, I’m not pining for it now like I thought it would. I’m ready to move forward.

I have a lot of goals that I want to accomplish this next year – not resolutions, really, since I think you can make meaningful change any time during the year (and any positive habits I’ve formed during the past several years were not a result of New Year’s resolutions). But I still love making lists of what I want to achieve for the upcoming year.  And for this decade, I want to continue growing and learning, to be a better human.  I want to travel as much as I can and create and grow my skills. I want to continue throwing myself outside my comfort zone, boundary setting, and learn to prioritize my needs and wants.

If you’ve made it this far, thank you for reading! I wish you a very Happy New Year and best wishes for the decade to come.

Tagged as: 2020, Austin, can you put the past away?, growth, Indiana, Indianapolis, Life, New Year, Texas