Crafting From My Stash

I spent the weekend trying to center myself and mentally prep for the busy week ahead of me. Yoga Saturday and a Barre class from PopSugar Fitness that completely kicked my ass on Sunday.  Weekly chores.  Coffee.  Bookstore, where I sat down with a copy of Mindful magazine, where I read the following soothing words:  “Fear:  Self-criticism is an effective motivator.  Truth: It’s not.  Our self-criticism tends to undermine self-confidence and leads to fear of failure.  If we’re self-compassionate, we will still be motivated to reach our goals – not because we’re inadequate as we are, but because we care about ourselves and want to reach our full potential.”

Wise words, indeed. I love when I’m reading a magazine or book and I feel like the sentence I’m reading is speaking directly to me and it’s exactly what I needed to hear.  It’s very soothing.

Husband asked me if I wanted to do some retail therapy at a yarn shop this weekend, and we even drove right by one this weekend. BUT I DIDN’T STEP FOOT IN ONE!  I haven’t bought yarn in a month, and it feels great! I’m still determined to craft as much from my stash as I can.  This weekend I restarted a long-dormant project.  Remember the 2017 Scheepjes Hygge Crochet-a-long?  I had ordered the kit back when it was first released, and had started making progress on Week 1 of the CAL. It was abandoned for several reasons – I was knee-deep in my first PE exam attempt and realizing that maybe I should, you know, study for it.  Wedding planning and a trip to Italy occupied my thoughts after taking the exam, and I never picked up the project again.

But most importantly – I hated my bobbles. They were not bobble-y enough (which apparently was a common complaint.  There were several hacks to make the bobbles bobblier, which I never attempted).

So yes, the box has just been sitting under the craft table for the past 2 years.

I opened it this weekend thinking, if I could finish this before moving to Indiana, then I will feel really accomplished.  AND it will be one less box to pack.  So I dove into the project.  I frogged the initial attempt and restarted the Week 1 pattern.  I made some decent progress with my bobbles.

The first row of bobbles was stitched using a pattern hack, but I was unhappy with the results, as the color of the bobble is showing through the piece. 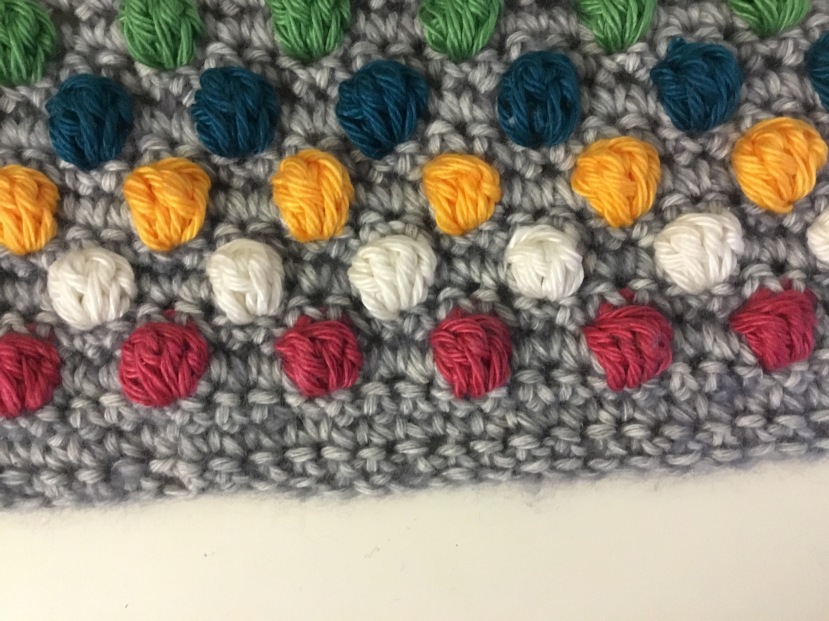 It wasn’t until I was on the second row of bobbles that I realized this. I was at a crossroads – do I frog the entire project again, or accept the imperfections and continue?  I knew that if I undid all my progress, the chances of my starting the project again were small.  I wasn’t doing this piece for a commission.  What if I just accepted the inherent flaws, continued experimenting with bobble stitches until I found one I liked, and continued stitching the piece?

This is ultimately what I ended up doing.  I found a stitch I liked and I think they’re working out pretty well. I will need to compare how my bobble stitches are worked up with the official CAL videos.  If they’re different, I’ll post what I did here. I have to say that while the bobbles are not PERFECT, I’m pleased with how they are progressing. 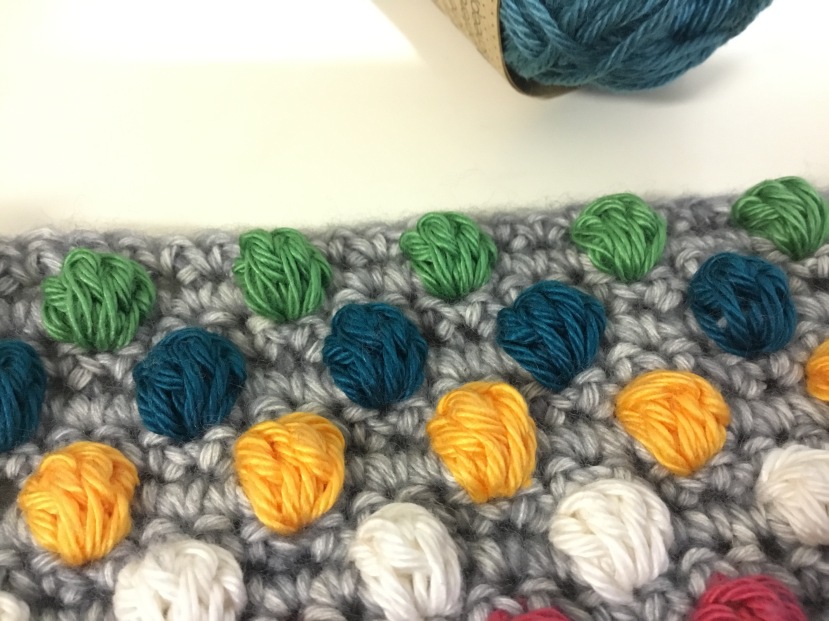 ::Insert paragraph about accepting my own flaws and imperfections, much like I would with my crochet projects, HERE and while I will continue making mistakes, as long as there is overall growth then I’m on the right track blah blah blah IT’S ALMOST FEBRUARY::

Have a great Monday!

Tagged as: crochet, crochet garments, hygge, hygge CAL, WHERE IS SPRING, WHY IS IT STILL JANUARY